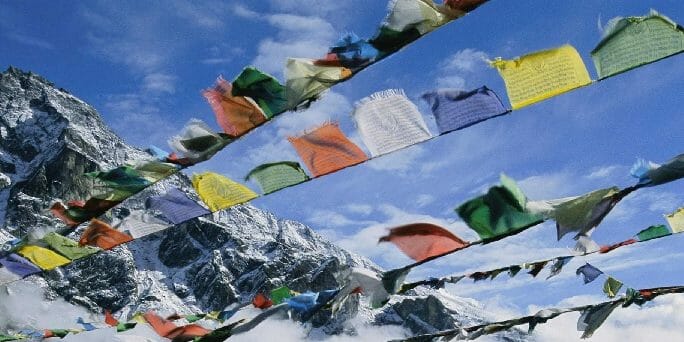 It was 5am and freezing cold as we shuffled into a taxi that looked like it had already driven across china and back, that morning. When I say it was average, I mean the brakes were supplemented by the hand brake as the hills got steeper and the suspension was no better than the elephant basket we rode in the day before! 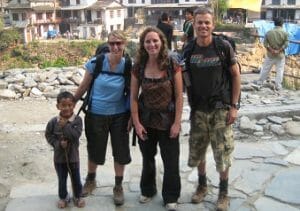 After an hour or so of Traditional Hindi music interspersed with Brittany Spears at top volume we were finally dropped off at our starting point. We were heading for the Annapurna region of Nepal to do a 5 day hike and immerse ourselves in the local culture. We were fit, healthy and looking forward to the challenge and after surviving the trip there, we were delighted to be relying only on our two feet and off the treacherous roads of Nepal!

We started hiking, and after an hour or so we were out of the village and into the open hills and country side. We reached an amazing wire suspension bridge that was draped in every possible direction with beautiful prayer flags. The scene was absolutely breath taking and like typical tourists we had our cameras out soaking up the experience.

And then we looked up… there above us were the notorious Annapurna steps, thousands and thousands of steps that just keep climbing up and up until you think you surely must be in gods territory. Have you ever had that feeling in your life where you realise that despite all the preparation you’ve done, all the hard work you’ve put into getting where you are… it’s not enough. All of a sudden, I realised what we were in for, and boy did my heart sink!

Climbing the Annapurna steps was more of a challenge than I ever anticipated, and after the first two hours I thought we’d never get there. My knee was already complaining and I knew we had another day and a half to go, of steps that is! As we hiked upwards, the scenery became more and more beautiful, we got peeks at snow-capped mountains, ate the freshest traditional cuisine and met some beautiful local people.

Absolutely knackered….. on the first day, we stopped for lunch, a simple dahl served by some of the friendliest people in the world and the best scenery you can imagine. As we sat and pondered what on earth we were doing, a convoy of donkeys made their way up the steps. Each donkey had a metal basket carrier on its back and a 40L gas bottle on each side. We asked our host what all the gas bottles were for and she said simply “you will have hot shower tonight, yes?”, to which I responded “Oh Yeah, I’m having a hot shower tonight!” She said, “the gas is to heat the water, so you can shower.” Never in my life have I been so grateful to a donkey nor appreciated hot water so much!

We continued climbing, and we climbed, and then just when we thought we were nearly there, we kept on climbing up those dammed steps! We finally made it to Ghorepani after 3,283 steps. I not only was delighted that we’d made it, but I realised at that point two very important things:

Traveling Australia with Kids – The good, the bad and the utterly ridiculous
May 22, 2021

What is hedonic adaption and what does it have to do with happiness?
April 22, 2021

What is Positive Psychology Coaching and how does it differ from Life Coaching?
March 26, 2021
Go to Top