Meet the Cooper Family… The good, the bad and the utterly ridiculous. 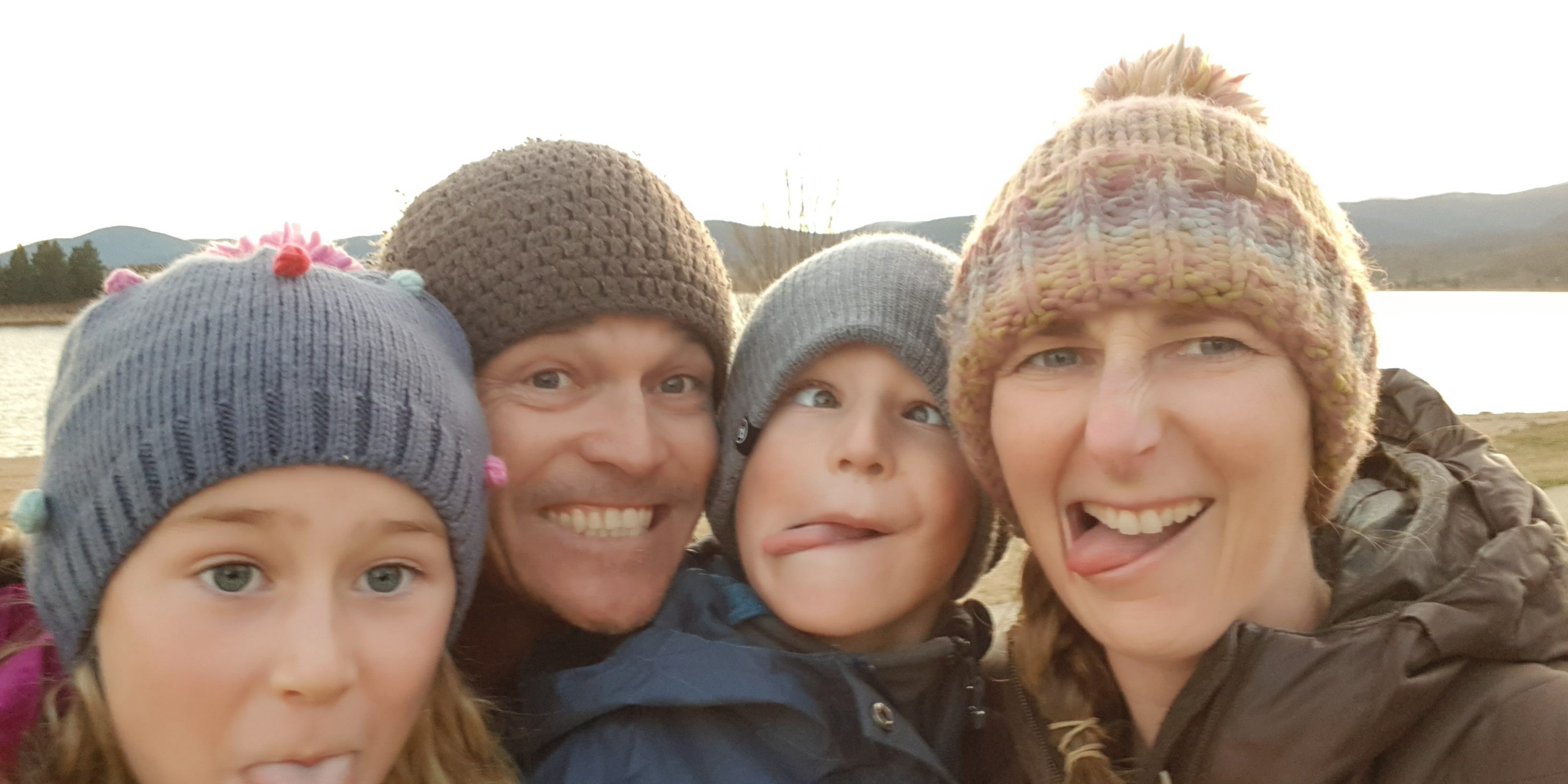 The Cooper Family are a little quirky, just like every family I guess. But, considering you’ll be coming on our little adventure as we travel around Australia…. (and that it’s now under three months away), I thought I should really introduce our family, so you know who we are. 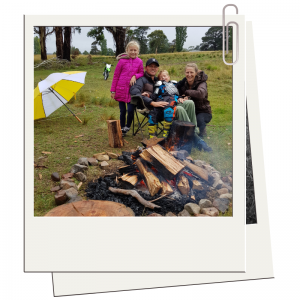 The Cooper Family are all pretty fit and active, and enjoy adventures in the outdoors. We all love lemon sorbet, slack lining and playing monopoly in our caravan, who we’ve affectionately named Macey. We think all families are a little special, and want you to understand how our family, the Cooper Family, works (in our own weird and wonderful way.)

Our little family consists of Sean, the Dad, Jodie, the Mum, Laura, the big sister (who’s eight years old), Dylan, the funny little brother (who’s seven), and of course Benson, our shaggy, golden cocker spaniel (recently called obese and geriatric by the Vet). Let me introduce them to you in turn and share a little of the Cooper Family’s quirks. 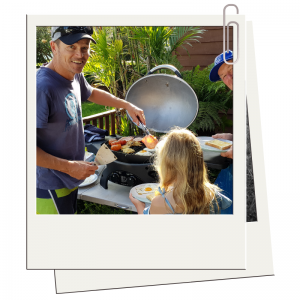 Sean grew up in the sleepy village of Wongawilli (which is now a suburban sprawl). He has a love for surfing, motorbikes, animals and pretty much anything active and outdoors. He rides a Honda CRF 450X whenever he gets the chance and has a penchant for making his own surfboards. Sean’s strengths include his perseverance, humor and leadership. His ability to crack a joke can turn any situation around, and everyone seems to naturally gravitate to him for direction (including Benson).

Sean’s happy to watch any form of sport on TV, but doesn’t like any other form of technology, (including his own phone, which drives him bonkers). He also has an uncanny memory for useless information (deemed so by his wife) and can recall who scored the last try in the 1998 grand final and who discovered Mount Kosciscko. He’s hardworking, kind and funny, and still goes alright on a snowboard. Sean and Jodie met online (yes, way back when online dating was totally weird) in 2005 and they married in Koh Samui in 2008. 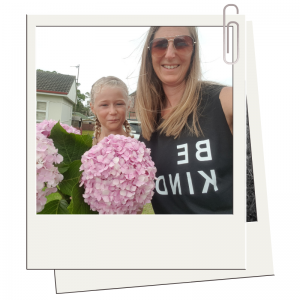 Jodie (that’s me) has a big love for learning and I often wake early to indulge in my passion before the rest of the family surfaces. I’ve had my business for 13 years and am (fingers crossed) almost finished my master’s in Positive Psychology at Melbourne uni. I ride what is affectionately known in the family as a ‘chook chaser,’ an old farm motorbike, kindly donated to us… because it was so slow, the chooks were getting away. LOL

I love Mexican food, snowboarding, standup paddle boarding, slack lining and doing yoga (sometimes in weird places like the kids’ bus stop, or skate park). I love strength-based parenting and am slowly converting the rest of the Cooper family. My strengths include gratitude, zest and curiosity, which annoy everyone in the family on a Sunday morning.

Laura is eight, (going on 18), and loves anything to do with fashion, food, gymnastics and dancing. She rides a Honda 70 and currently holds the record for ‘most laps’. Laura has a penchant for doing handstands (instead of homework or chores), anywhere and everywhere, and is happy if she’s moving.
Laura’s strengths include gratitude, responsibility, love and appreciation of beauty and excellence. She’s likely to notice things that others don’t and point out a beautiful flower or sunrise and share it with others. Laura’s school report said, ‘she’s always responsible and helping others, and if the class were filled with Laura’s, teaching would be bliss’. Many photos of the kids as little ones show Laura with her arm protectively around her little brother. Laura can also get her brother organized for school, make dinner and clean up the house and is a massive help in the Cooper family. (In fact, our house probably wouldn’t run without Laura’s hard work.)

Dylan is now seven and holds a reputation in the Cooper family as being the comedian. He loves making people laugh and is always creating little moments of joy, often dancing to obscure tunes he’s made up while, shaking a bottle of milk about. (Yes, it’s ended badly more than once, but hey, that’s the price of comedy.) Dylan loves anything to do with motorbikes and rides a Yamaha peewee 80 like a demon. The adults at the motorcross track are constantly amazed that he can clear a tabletop, and he’s an easy going, shy little man that is blessed to already know his passion.

Dylan’s strengths are his perseverance and kindness and his ability to always think of others and find ways to help them. He recently took out the claim to ‘best stack ever’ over a giant jump and buckled his bike. Thankfully he walked away with only a few scratches. His school report said, ‘mature beyond his years’ and when little, Dylan was asked, what would you do if you won lotto, his immediate response was “give Laura half.” 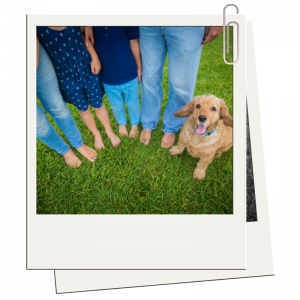 The Cooper family wouldn’t be complete without Benson. He’s our nine-year-old, golden cocker spaniel. Benson looks like a giant, shaggy teddy bear that’s surfed all his life and is happy to be near the ocean. People often comment that he’s the happiest dog they’ve seen as he literally looks like he’s smiling when he’s at the beach. He’s lots of fun and has an adorable playful nature. The vet did recently call him geriatric and obese, but we told him about the ‘sticks and stones’ poem and he got through it.

Benson loves being a pillow for the kids and if you utter the word beach, you’ll actually put him in a tailspin. Benson is a people dog, but has a passion for rocks, carrying them around, chasing them, leaving them at the front door, but I guess we all have our quirks don’t we. He loves jumping in the waves at the beach, but at his utter disgust, is then banned from coming inside. His strengths include zest and love, used always, with everyone. 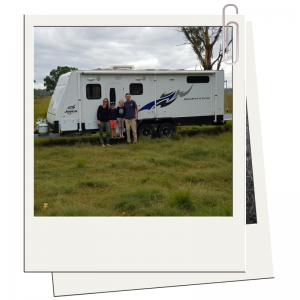 Essentially the Cooper family are kind, playful, optimistic, and love to have adventures in the outdoors. We’re not great with homework, team sports, routine or social etiquette. Actually, farting is a social norm at the Cooper family dinner table, and the more comedic timing the funnier (sorry Nan & Pop).

Come November, 2019, we’re off on our big adventure around Australia. Our blog ‘adventures in positivity’ will be a journal of not only what we’re up to, but also how we’re putting the science of positive psychology to use in our family. We’ll explore how hope plays out, what savoring means, how to practice a growth mindset, and what happens when you put willpower to use in various areas of your life.

Hope you can join us and build your own adventure in positivity too.

Practicing gratitude with the family
January 11, 2020

The Geography of Bliss By Eric Weiner – A Book Review
December 16, 2019

Dealing with anxiety and uncertainty – Yep, me too.
October 7, 2019
Go to Top